Iguanas are considered invasive to South Florida and are wreaking havoc to our local ecosystems. This in turn is having an adverse effect on our local plants and animals. Iguana Removal is very important.

Types Of Iguanas In Florida

Large lizard, not native to Florida. Hatchlings and juveniles display a bright green coloration. Adults can range in color from green to brown to almost black.

During breeding season (Late fall/early winter), mature male iguanas take on an orange coloration, along with their heavy jowls and dewlap, in order to attract mates. Here in South Florida, there appears to be larger populations near and around bodies of water. Each female green iguana can lay up to 70 eggs annually.

Iguana feces can contain salmonella, which becomes a big health risk for humans and pets, especially if the feces is located in and/or around pools.

These iguanas get their name from the distinctive ridged scales on their tails. They are typically brown or grey brown in coloration with a yellow ventral (abdominal) surface.

These iguanas are great climbers and prefer a rocky habitat with crevices to provide shelter. They are opportunistic feeders, primarily herbivorous, however will eat small animals, eggs, and arthropods (insects).

Typically more aggressive than the Green Iguana and will bite and scratch if cornered so practice caution when approaching.

They are difficult to distinguish from Mexican Spiny-tails, but Ctenosaura Similis has 0-2 scales separating the short crest along the back and tail, 2 complete rows of intercalary scales between the whorls of enlarged scales on the tail, and dark dorsal crossbands.

Black Spiny-tail Iguanas are primarily terrestrial animals and like to dig burrows. Here in South Florida, these burrows can be found under structures such as houses, sheds, beside pools and seawalls. They are very alert and agile and typically dash to burrows at the first sign of danger.

Similar to their relative Mexican Spiny-tails, Black Spiny-tails will scratch or bite if cornered. 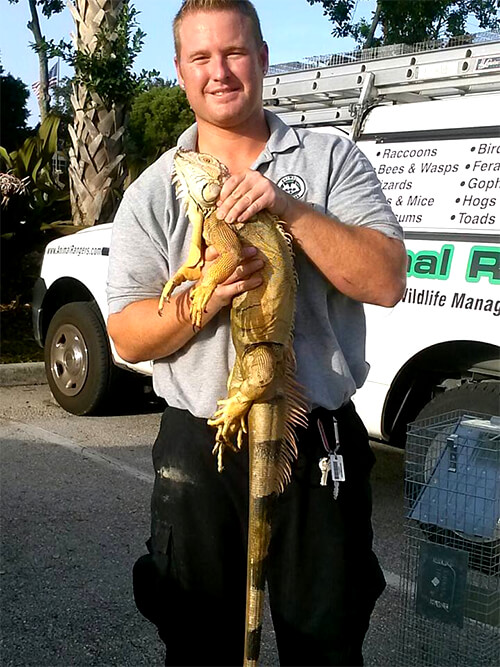 Green iguanas were first reported in Florida in the 1960s in Hialeah, Coral Gables and Key Biscayne along Miami-Dade County’s southeastern coast. Green iguana populations now stretch along the Atlantic Coast in Broward, Martin, Miami-Dade, Monroe and Palm Beach Counties and along the Gulf Coast in Collier and Lee Counties. There have also been reports as far north as Alachua, Highlands, Hillsborough, Indian River and St. Lucie Counties. However, individuals observed in more northern counties are likely escaped or released captive animals and are unlikely to establish populations, as iguanas are not cold hardy. In cleared habitats such as canal banks and vacant lots, green iguanas reside in burrows, culverts, drainage pipes and rock or debris piles. South Florida’s extensive man-made canals serve as ideal dispersal corridors to further allow iguanas to colonize new areas.

Green iguanas cause damage to residential and commercial landscape vegetation and are often considered a nuisance by property owners. Iguanas are attracted to trees with foliage or flowers, most fruits (except citrus) and almost any vegetable. Some green iguanas cause damage to infrastructure by digging burrows that erode and collapse sidewalks, foundations, seawalls, berms and canal banks. Green iguanas may also leave droppings on docks, moored boats, seawalls, porches, decks, pool platforms and inside swimming pools. Although primarily herbivores, researchers found the remains of tree snails in the stomachs of green iguanas in Bill Baggs Cape Florida State Park, suggesting that iguanas could present a threat to native and endangered species of tree snails. In Bahia Honda State Park, green iguanas have consumed nickerbean, which is a host plant of the endangered Miami Blue butterfly. As is the case with other reptiles, green iguanas can also transmit the infectious bacterium Salmonella to humans through contact with water or surfaces contaminated by their feces.